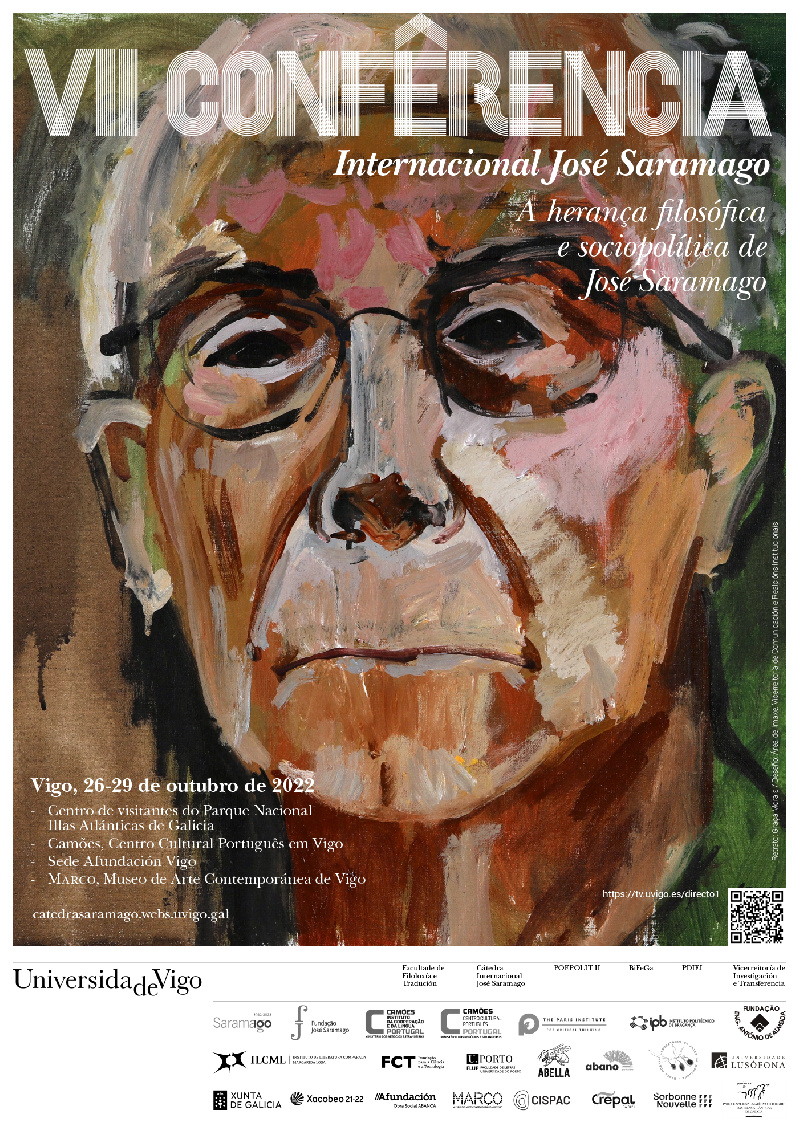 The year of 2022 marks the Portuguese Nobel Prize-winning author centenary and, among many events organised by numerous institutions all over the year, the VII International José Saramago Conference of the University of Vigo "José Saramago's philosophical and socio-political heritage" will be held between 26 and 29 October 2022 at the city of Vigo (Galicia - Spain).

On the world literary scene, José Saramago definitely holds today a prominent place. The significant influence his work, which has already been translated into more than 50 languages, has had not only on the western culture but also on the public opinion in general, as well as its international academic reception, make it enormously relevant. Dealing with the most pressing issues of the world today (from gender equality, environmentalism, speciesism vs. anti-speciesism, consumerism vs. anti-consumerism, culturalism vs. anti-culturalism to capitalism and the neoliberal economy), Saramago's work provides an excellent starting point for the critical examination of our globalised society and the cultures and economic and political structures of the West, which have been experiencing ongoing crises in recent times that demand reflection and active participation.

The theme for this VII Conference was inspired by the book Saramago's Philosophical Heritage (2018), edited by Carlo Salzani (University of Veterinary Medicine Vienna) and Kristof Vanhoutte (University of the Free State, Bloemfontein), professors and philosophers from the Paris Institute for Critical Thinking (PICT), who are also co-organisers of the event.

As a first thematic axis, we will be exploring the great contemporary relevance of the philosophical legacy left by José Saramago, including questions related to animals, empathy, and anthropomorphism. The socio-political objectives of the JaRICCA network, derived from the Universal Charter of Duties and Obligations of the Human Beings, will also be tackled as part of this axis.

This Charter was inspired by the speech delivered by Saramago on 10th December 1998 in Stockholm, where he received the Nobel Prize. The document was composed at the National Autonomous University of Mexico (Universidad Nacional Autónoma de México, UNAM) by a Commission of international experts and later submitted to the United Nations in 2018. Taking into account the significant moral message conveyed by this, the the second thematic axis of our conference will be Universal Charter of Duties and Obligations of the Human Beings and the resulting international discussion on related topics.

As a third thematic axis we will address the connection between the poetical and the political in José Saramago, which will be closely linked to the research project "Contemporary Poetry and Politics: Social Conflicts and Poetic Dialogisms", led by the CJS.

Finally, the fourth thematix axis will be focused on analysing the current situation and the future of Galician culture and language, using Saramago's reflections and views as a starting point.

Structure of the event

The conference will be open to everyone who has an interest in the saramaguian work and thought. It will take place in a face-to-face format in three different locations and the main lectures will be streamed live on UVigoTV website.

The broad structure of the event will consist of four plenary conferences by keynote speakers, two round-tables, two specific thematic panels and 10 parallel panels on a series of topics.

Generally, participants in panels will be presenting 20-minute communications followed for a short debate or Q&A sessions. The following topics will be tacked: Philosophy; Politics; Sociology; Ethics (especially, the Charter of Duties and Obligations of the Human Beings); Animals, Empathy and Antropomorphism and the poetical and the political in José Saramago's work.

Portuguese, Spanish, Galician and English will be the working languages of the conference.

For more information, please, see the preliminary schedule and a brief presentation of the event in Portuguese attached to this post. The English versions will be available soon.

Kristof Vanhoutte (Paris Institute for Critical Thinking/University of the Free State, Bloemfontein): “Islands and Boats: (Lucid?) Meditations on a Stone Utopia and a Naval Heterotopia in the work of Jose Saramago”

Carlo Salzani (Paris Institute for Critical Thinking/University of Veterinary Medicine Vienna): "The Temptations of Anthropomorphism, or, How an Elephant Can Help Us Become More Human”

A by-now solid body of scholarship supports the claim that literary works enrich and enlarge our power of imagination, and consequently, as moral thinking too has a narrative form and is shaped by stories, our moral capacity. The work of Portuguese Nobel Laureate José Saramago is a case in point: both his fictional and nonfictional works carry a strong ethico-political charge that lies more in the power of his words and images than in explicit ideological postures. And a special focus of this charge is the empathetic demands his oeuvre puts forwards: Saramago’s literature teaches empathy and brings us in contact with other beings – human and nonhuman alike –, assigning us the task of going outside ourselves and meeting the Other. Animals in his works (especially, but not exclusively, dogs) perhaps even epitomize this ethical imperative, asking the reader to meet the Other in all its forms, where anthropomorphism and its heuristic value is questioned and redefined.

"The Poetical and the Political in José Saramago" organised by Burghard Baltrusch (Universidade de Vigo) within the context of the research project "Contemporary Poetry and Politics: Social Conflicts and Poetic Dialogisms (POEPOLIT II)".

In a 1989 interview, José Saramago characterised his writing as follows: "I begin to understand that the novelist is probably something other than what I am. I'm a kind of poet who develops an idea. In my books things happen a bit like a fugue. There is a theme that is later subjected to different treatments in terms of timbres and movements. This can happen in my books. You reach the end of the reading with the impression of having read a long poem." This and similar statements from Saramago must of course be related to his politically-minded way of writing that aimed to convey memorability to what hegemonic discourses usually tend to turn invisible, and that always reclaimed ethical responsibility and action. In this sense, the panel wants to explore the relationship between the political and the poetic in its work in all possible dimensions.

The event will be taking place from 26 to 29 October at the city center of Vigo in three different venues located in close vicinity to each other:

Humanity/Humanities on the move - International conference 2020